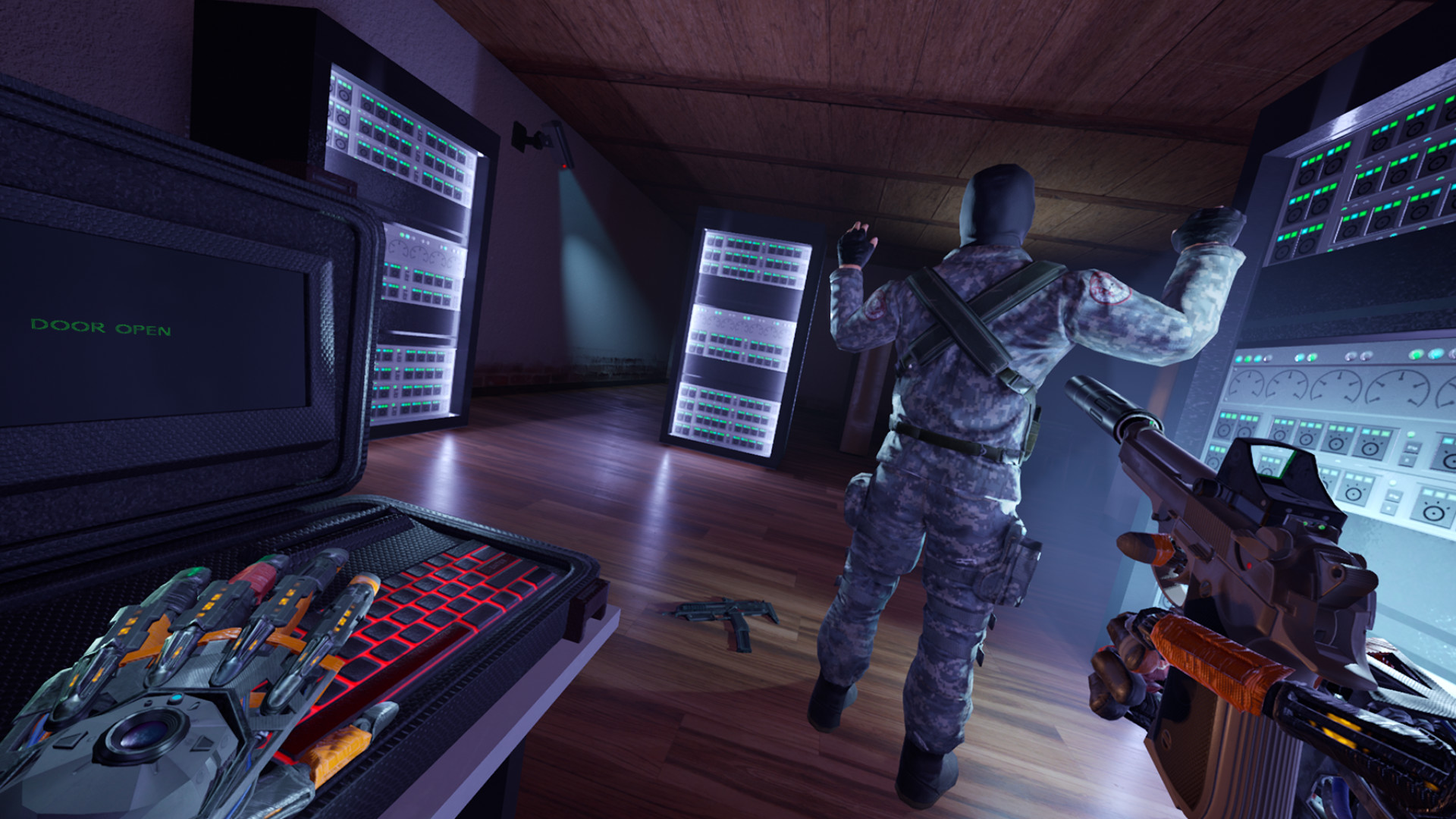 Espire 1 From Conception Through the Latest Spectre Update

Over the past four years, as Wentworth-Bell has nurtured and developed the game, it has gained many “surrogate parents,” as he fondly refers to the people who continue to support development of Espire 1. Like any good parent watching their child begin to develop a life of their own, Wentworth-Bell beams proudly as the game continues to expand with new options like a sawn-off shotgun and campaign options.

In the beginning, the 33-year-old from Melbourne, Australia worked on the game when he could find time outside his day job as a 3D artist. Then, in early 2017 he created a short teaser video called “Espire 1: A VR stealth game prototype.”

After the video received a positive response on Reddit, it ultimately caught the attention of Jared Creasy, the community manager for Tripwire Interactive. Creasy showed the video to John Gibson, president of Tripwire, who reached out to Wentworth-Bell.

“Early on, this was a solo project and when John Gibson asked for a game design document, I would spend all weekend scrambling to make one and put it together,” states Wentworth-Bell. “When he asked for an NDA [non-disclosure agreement], I would google what that meant and try to get a template from my friends.”

The budding game developer also tried to defer Gibson for as long as possible when he asked to play the prototype because some of what Wentworth-Bell had shown in the early teaser video was “smoke and mirrors.” Although he knew what he wanted in the game, he didn’t know how to develop all those features and he readily admits that he needed a team.

Fortunately Wentworth-Bell found a kindred spirit in Gibson, who has become a mentor and a friend.

The development team at Digital Lode, an immersive media company, also came in to support the Espire project and Wentworth-Bell states that Gibson, along with a few other key mentors, friends, and advisors, along with a “heap of support from Oculus” helped keep him motivated.

Gaming is not a new interest for Wentworth-Bell, who grew up playing first-person shooters like Duke3D and titles from id Software in the 90s. With a keen interest in how games were made, Wentworth-Bell worked on a few mods for Duke3D and Half-Life, but by the end of high school, he began to focus exclusively on motion graphics and animation.

“My education and my career before Espire was in 3D animation and motion graphics,” he explains. “I was used to working on animation projects where the computer might take 60 minutes to render a frame, and so I was fascinated by the early Oculus Rift Development kits that could render 3D scenes at 60 frames per second and allow you to be ‘present’ in these 3D environments!”

Ultimately he ordered a DK1 just as the DK2 was coming out so Oculus swapped his order to the latest kit. When it arrived, Wentworth-Bell wasn’t aware that it allowed for positional tracking.

“I remember trying the early demo of ‘I Expect You to Die.’ A laser beam was pointing at my face and kept killing me over and over again. I had no idea how to avoid dying,” he recalls. “A friend suggested leaning out of the way and I laughed at them. ‘VR can’t do that yet!’ But the moment I actually tried to move, and saw the laser burn a hole in the chair behind me, I was completely enamored with VR and I have been a true believer of the power of this immersive technology since then.”

Wentworth-Bell began investing all his free time into experimenting with both real time rendering and VR. One day he was listening to a podcast and a listener asked “Why are there no stealth games in VR in the style of Metal Gear Solid?” Since that day, he became transfixed by that idea and began prototyping the idea that would become Espire.

For Wentworth-Bell, the phrase often used to describe the game “Goldeneye 007 meets Metal Gear Solid in VR” is more than a pitch.

“These two games are my absolute favourites and huge inspirations,” he says. “I was inspired by Goldeneye for so many reasons beyond the game itself. Goldeneye was developed by a small team [Rare], and for many of them, it was their first commercial project. With Goldeneye, the team was also trying to create a 3D FPS for a console generation that was unlike any before it. [They were] trying to make this FPS fun with an analogue stick controller.”

“I don’t for one second think Espire is approaching anything near the execution of Goldeneye, but there were a lot of things about Goldeneye’s development and the team behind it that have been a huge inspiration for me as we tried to build our game.”

VR is still a small market and Digital Lode is a first-time development team in Australia. Wentworth-Bell found encouragement through the similarities they would face when trying to develop a unique stealth game with new features in virtual reality.

With that said, he says the Digital Lode team has been inspired by numerous other games as well.

“As gamers who are enamored with VR, our game design process has always been, ‘This game mechanic from game X is so cool. How would you do this in VR? Can we do it in a unique way that requires positionally-tracked head and hands?’ This is how we developed ideas like Espire’s detachable hand cameras and the repair tool.”

Espire 1 is a dedicated single-player experience with individual story missions and shorter one- to eight-minute challenges where you must complete single objectives within limits in regards to time, number of bullets, etc.).

The entire campaign plays out a series of six objective-based missions that take 30 to 90 minutes each to complete for a total of about four to six hours of gameplay.

In regards to replayability, the developers are definitely conscious that people are looking for this attribute. One way they’ll encourage people to play through the campaigns more than once is with a leaderboard that awards players a competitive score based on mission time, stealth, ammo conservation, and other factors.

The Espire 1: VR Operative Spectre update made available for the Oculus Quest and Quest 2 platforms offers two new playable weapon to the title’s campaign in addition to the Furcata Hostage Rescue challenge and the Mangua Takedown challenge. These virtual challenges are reported to be the most difficult challenges implemented in Espire to date so experienced stealth operatives can let us know how they fared after trying them.

Note that the Spectre update is only available for the Oculus Quest platforms.

You can play Espire 1 on all major HMDs and the game can be purchased on the following platforms.

Espire 1: VR Operative has definitely been one of my favorite experiences and I’m typically a fan of multiplayer games, but Espire is one of the single-player games that continues to draw me back. The game is well-polished, didn’t cause nausea, has a clear purpose, and definitely holds your attention. Plus, while it’s challenging, it’s also just plain fun!

Connect with the Community

As always, even with single-player games, we encourage you to engage with other VR enthusiasts as you'll be able to make friends, share tips for challenging missions, and chat about your favorite features. Although they've tried to remain stealthy, I found VR operatives at the following locations so now you can join them there!