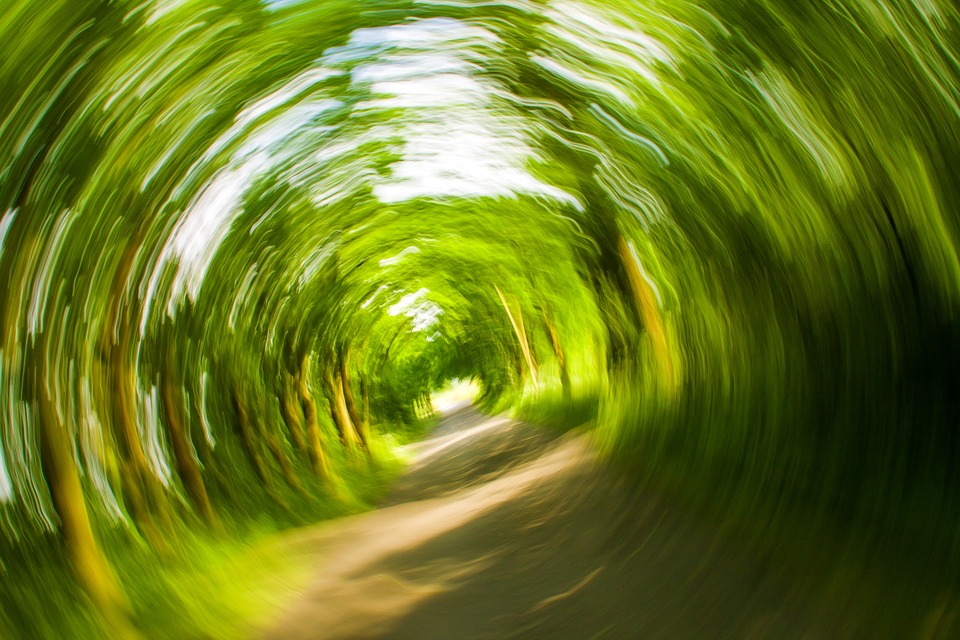 One of my fondest memories from childhood was visiting my great-grandparents on the other side of Daisy Mountain in Tennessee.Unfortunately I also have not-so-fond memories of cold washrags, constant nausea, and stopping on the side of narrow, winding mountain roads to throw up.Motion sickness has been a constant companion in my life until recently.Ironically, virtual reality – the very thing that some people complain causes motion sickness – seems to have eliminated it.

It’s difficult to explain, but it’s almost like there was something off balance so when I was in vehicles or on any surface that moved,the motion sickness was unbearable. After I began playing VR games in April 2017, I began to notice that I didn’t feel as “dizzy” all the time. About six months later, I tried riding as a passenger while my husband drove and I didn’t get sick. Then I even tried reading in the car. Again, I was fine. It’s the strangest thing to have a problem your whole life and suddenly it’s resolved.These days I fly around in zero-gravity with no issues (in VR of course), read in the car while others drive, and even look forward to experiences like flying.

Perhaps you don’t have motion sickness to that degree or maybe you aren’t looking for a cure, but you simply want to enjoy virtual reality without feeling that queasy feeling in your stomach. The following suggestions should help acclimate you to virtual environments!

Use a fan or open a window.

This is my number one tip. If you do nothing else, you must do this.

When you play standing, you increase the amount of movement and reach available for your body. We’ve all seen videos of someone in VR and they reach over too far, resulting in a face-plant on the floor. First, youdon’t need that added stress. Second, when you play seated, you’re naturally confining your movements so that you’re less likely to become disoriented. You can always switch to standing when you’re more used to virtual environments.

Close your eyes during transitions.

If scene is moving in such a way that makes you feel uncomfortable, just close your eyes. You can also do this when it’s transitioning from one screen (such as settings) to another.

Eat some ginger or a peppermint candy before you play. Both help deter nausea. Or, use aromatherapy. Peppermint oil has been shown to alleviate nausea. Lemon and other freshly sliced citrus also has a nausea-reducing effect so slice some lemons, put on some peppermint aromatherapy, and have some egg drop soup!

It never fails that we introduce friends to virtual reality and then they’ll complain about motion sickness. Inevitably they admit that they went straight to roller coaster simulations.

Do NOT jump into virtual reality and do things like roller coaster rides or horror games where the experience goes on without your control. Choose games where you’re in control of the situation and there’s not a lot of movement. Most importantly, make sure you are in charge of the tour or the experience.

Here are a few suggestions to start with:

This might sound silly, but make sure you breathe. Don’t hold your breath. A lot of people don’t realize that they hold their breath when they’re nervous so just relax and breathe normally. Controlled breathing will help avoid nausea.

Lower the brightness on your headset.

When you lower the brightness, you’ll reduce sensory input a little bit and this might help your brain adjust more easily to the environment. For that matter, also make sure your volume isn’t too high on games.

Eat and hydrate before you play.

This seems like an obvious solution to avoid nausea, but many people simply don’t realize that VR gaming is much more like traditional exercise than it is like playing a computer game. Your body needs food when you exercise so make sure you’ve eaten before you play. Also stay hydrated. I’m certain the players of VR League Season 1 grew weary of hearing me say this,but I thoroughly understand the consequences of dehydration as it can lead not only to nausea, but blood clots or worse.

Some games have an option to limit field of view when your character is moving from one location to another. This is supposed to help with motion sickness, but those literally make me feel nauseous every time. If this is on, try turning it off and see if that helps.

Make sure your headset is calibrated properly.

If there is an adjustment for visual calibration, such as there is on the Oculus Rift, be sure that the headset is in focus. This is essential because if it isn’t, you might not only experience nausea, but also headaches. Besides, your VR experiences will be sub-par if they’re out of focus!

Some headsets are superior to others.

If you’re prone to motion sickness, choose a headset with 6DoF (degrees of freedom), such as the Oculus Rift, HTC Vive, or even the Oculus Quest. (The Quest will be released Spring 2019. I had the opportunity to try it last fall and it was amazing. You can read about that here.)

Although the Oculus Go is an amazing and affordable stand-alone headset, it only has 3 DoF and for some people this can be a little disorienting. I definitely recommend it for terrific VR experiences in homes,hospitals, educational settings, etc., but not for people prone to motion sickness.

Finally, although I’ve never actually tried the PlayStation VR, many of our friends have purchased the PSVR because they already have the PlayStation and some complain about nausea. This causes me hesitation in recommending it so I would definitely try it at a friend’s house first.

Invest in a good setup.

Since I’ve been playing VR games, I’ve only ever felt queasy a few times and most of those were due to framerate issues so this is definitely a big one! If frames-per-second (FPS) drop too low (in the 30-60 FPS), for example, it can cause jittering of the screen. Suddenly your brain starts screaming that the sky is falling and there’s something wrong with your world and the next thing you know, you have those butterflies in your stomach.

OK. Perhaps it’s not that way for some people, but if you’re prone to motion sickness, you’ll know what I’m talking about!

If you want the best experience in VR, invest in the latest hardware (CPUs, GPUs, graphics card, RAM, etc.) and make sure your PC meets requirements necessary to run the headset you’ve chosen. As a side note, don’t let the cost of a PC turn you away from virtual reality. The Oculus Quest will be coming out soon and it’s an amazing all-in-one VR gaming product with a price point of $399 and no external computer necessary.

Generally I avoid this suggestion so I saved it for last,but in reality there might be some people who need some assistance during their first sessions of virtual reality. If you find that the above suggestions just aren’t enough for you, then take a medication such as Dimenhydrinate (Dramamine) about 30 minutes before you put on your headset.

Stop when you feel bad.

Although time in virtual can acclimate you to it, that doesn’t mean you need to push through it once it has already started. If you’re feeling nauseous, stop playing and try again later. You’re not going to have a good experience if you’re sick.

Finally, if you are simply considering which product would suit you best at this point, we would highly recommend that you visit a demo station or try virtual reality at some friends’ houses to see which headset feels best to you. Personally, I prefer Oculus for several reasons, but you just can’t go wrong with the Rift. If you want an untethered (and much more affordable) experience, then I’d recommend that you wait for the soon-to-come Oculus Quest.

The suggestions listed above should help most users avoid motion sickness in virtual reality. We want your virtual experience to be a positive one so give these a try and then let us know if they work for you!