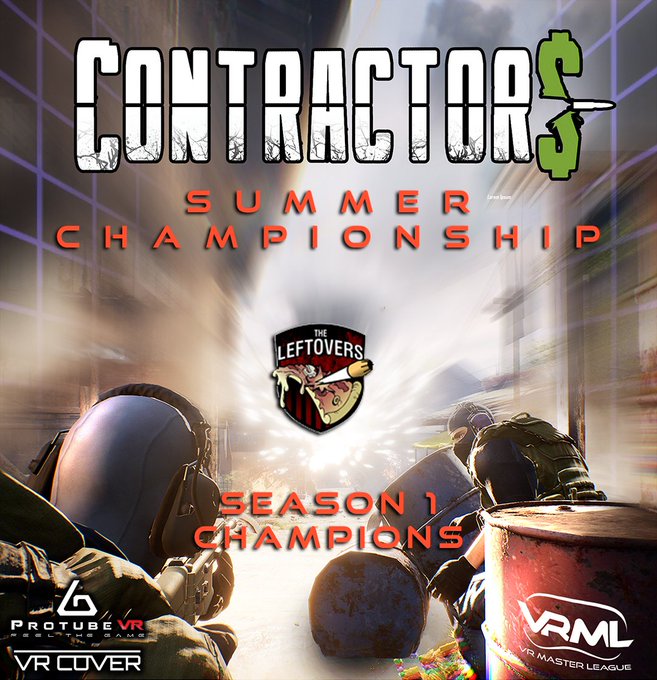 Contractors finished season 1 of the VR Master League with intense competition in the final round between two European teams: Assassins and The Leftovers. Ultimately The Leftovers claimed bragging rights and some great prizes for the first Contractors season title, but it wasn’t easy as the Assassins were worthy foes in a finale that ended 3-2.

Contractors is a VR first-person shooter from Caveman Studio that was welcomed to the VR Master League earlier this year. The VRML is a community-driven platform that supports the competitive VR scene for games such as Downpour Interactive’s Onward, davevillz’ Pavlov, and Phaser Lock Interactive’s Final Assault. Now Contractors has been added to this incredible community.

Although this is the first season of Contractors, The Leftovers team has a group of players who are experienced in the VR first-person shooter genre. Some of them have been playing together for two years and they’ve played some of the most popular VR games available, including Pavlov, Archangel: Hellfire, and Space Junkies.

We’ll be sharing some more information about The Leftovers soon, but for now we’d like to introduce you to the team. Congratulations to The The Leftovers for claiming the Contractors VRML Season 1 championship title!

Fun fact: V-Tach enjoys outdoor activities such as wakeboarding, hiking, and golf. When he’s not in VR or at work, you’ll probably find him enjoying the great outdoors of the southern United States.

Quote: “I think the thing that makes TL so special is the synergy we have. A large part of our recruitment is a person’s personality and how well they ‘sync’ and get along with everyone rather than just skill, which I believe gives us a better team dynamic than a lot of teams. I consider everyone on the team a friend and I care about them and their lives beyond just a game or the match.”

Quote: “I’ve spent a significant amount of time in VR shooters for other competitions as well as just fun, but Contractors has a really well-balanced gameplay that keeps the game from going stale.”

Fun fact: Proper_D qualified for the VR League Space Junkies Season 1 finals with MrRJGreen. The two competed in the event that took place in Leicester, UK in June as part of VR League Season 3 Grand Finals.

Quote: “I love the fast paced action of contractors. Respawning makes for a interesting squad dynamic.”

Fun Fact: MrRJGreen qualified to compete in the Space Junkies Season 1 competition at the VR League Season 3 Grand Finals in June. Although they lost, Ryan was the first player to compete in a VR League LAN event in a wheelchair, paving the way for others to be inspired and follow him, despite their own physical challenges.

Read more about Ryan’s amazing journey in this article.

Quote: “Apart from VR, I’m interested in all new technology. I always want to know how everything works so I enjoy gathering knowledge and understanding about different areas: physics, engineering, and recently even psychology.”

Fun fact: Unlike many players of VR first-person shooters, Nachtom doesn’t use a gun stock. His preferred gun is the CZ 805, initially chosen because it’s made in his home country, but then he realized it’s a perfect gun for the close-range combat he prefers.

Fun fact: Although Phaenix has only ever played with The Leftovers in Pavlov, she is a lady of amazing beauty and talents. Since she wasn’t playing in the Contractors VR Master League with The Leftovers, she switched roles a bit and actually did a bit of shoutcasting during the semi-finals and finals.

Quote: “I’m a G3 dude through and through, and Wildlands is probably my favorite map in Contractors. I’ve had stints with all the major VR shooters and Contractors just plays so well. The gunplay and pace of the game keep me coming back.”

Fun fact: He loves Ping Pong! This is one of his hobbies, in addition to playing some sports (like tennis) and he also has an interest in snowboarding.

Quote: “There are very few people who actually play with shotguns in Contractors, so it’s always nice to surprise enemies with a loud BANG from up close.”

If you’d like to play Contractors or become involved with the VR Master League, download the game and reach out to the community. If you have questions, be sure to ask them on Discord or in game. VR esports is a growing industry and it’s always great to see new faces join!