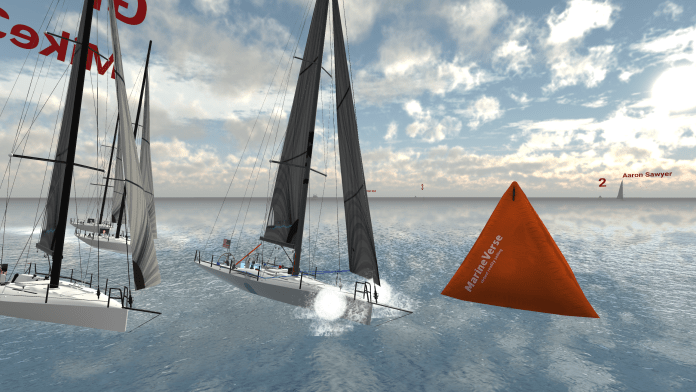 VR Regatta: VR Esport For The Sailors Among Us!

The best VR esports make the participant feel like they’re actually immersed in the experience and they’re more akin to real-life sports than computer games. MarineVerse has given us a terrific virtual experience that allows users to master sailing skills and then test their abilities against others in sailing races.

MarineVerse was founded in Melbourne, Australia by a small group of passionate sailors and technologists. They began working together in 2016 with the mission to create the best interactive virtual reality sailing experiences in the world.

Thanks to investment funding from Film Victoria, MarineVerse was able to pursue that mission and today they have a global team with partners in Melbourne, San Francisco, and Toronto.

VR Regatta: The Sailing Game was released on September 13, 2018 and it has become the leading sailing game on virtual reality headsets such as the Oculus Rift, HTC Vive, and Windows Mixed Reality.

One goal of the MarineVerse team was to create a program that could be easily used by anyone, whether or not they had experience sailing. It also provides senior sailors with continued access to a sport they love in an environment that encourages social interaction and doing activities that facilitate rehabilitation.

“I am really proud of how we were able to use VR to make sailing more approachable to everyone,” states Greg Dziemidowicz, director and lead developer at MarineVerse.

Regardless of how sailors want to harness the wind and trim the sails, there’s something for everyone.

Although VR Regatta is an enjoyable VR game, it’s also a solid introduction to the fundamentals of real sailing so it has the added benefit of serving as a simulator. There is even an AI instructor, Brian, who offers pertinent feedback and advice, depending on the player’s actions in game.

When you consider the fact that sailing instruction can cost hundreds of dollars for even a short course, simulated training in programs like VR Regatta gives sailors an advantage when they already understand basics of sailing, including steering and speed management, and have had an opportunity to practice sailing in a safe, realistic environment.

Stu Gilfillen serves as director of education for US Sailing, the National Governing Body for the sport of sailing, and recognizes this potential.

“What excites me about VR Regatta,” says Gilfillen, “is how it can be used in an educational setting. For those who have never been sailing before, using VR Regatta allows them to learn the basics and put them into practice without introducing any potentially dangerous elements. This approach will give them confidence to take the next step in their sailing, whether it’s as a recreational or competitive sailor.”

In addition to the basics of the beginner sailing academy, VR Regatta offers challenges and demanding long races for the pro sailor.

VR Regatta enables players to learn sailing at their own pace for an affordable price in the setting of their choice and last month the MarineVerse Cup became available on the Oculus Quest store through App Lab. The option to play the game and learn sailing on this affordable stand-alone headset that doesn't require a gaming PC will continue to create accessibility for anyone interested in VR sailing.

Sailing as a VR eSport

For those who seek competitive experiences in virtual reality, VR Regatta allows sailors to earn trophies, advance in rank, and climb the leaderboards. And like the best VR esports, the experience is definitely immersive so there’s the potential to get a bit seasick if you’re not careful since it feels like you’re really on the water!

There are various race series, including daily, weekly, monthly and even seasonal races. The MarineVerse website is constantly updated to track the top sailors and let others know how many more races they need to qualify for that particular series.

Recently MarineVerse had the opportunity to present VR Regatta at the National Sailing Programs Symposium in Jacksonville, Florida. They were able to present the game to both seasoned and first-time sailors. Sailing in virtual reality provides a convenient, fun, and risk-free environment in which to introduce people to the sport of sailing. Ultimately the goal is to encourage them to go sailing in real life, but VR Regatta provides them with a way to try the sport, master skills, and even compete in sailing races.

Currently races are asynchronous multiplayer, but according to Dziemidowicz, the team is working to create real-time multiplayer “racing between two yachts with crews of up to three sailors per yacht.” There is an active Discord server and it’s likely the real-time multiplayer beta beta would be announced there when it’s ready. Users are also encouraged to discuss races and ask questions on Discord.

For more information about VR Regatta or participation in the sailing races, please check out the following resources.