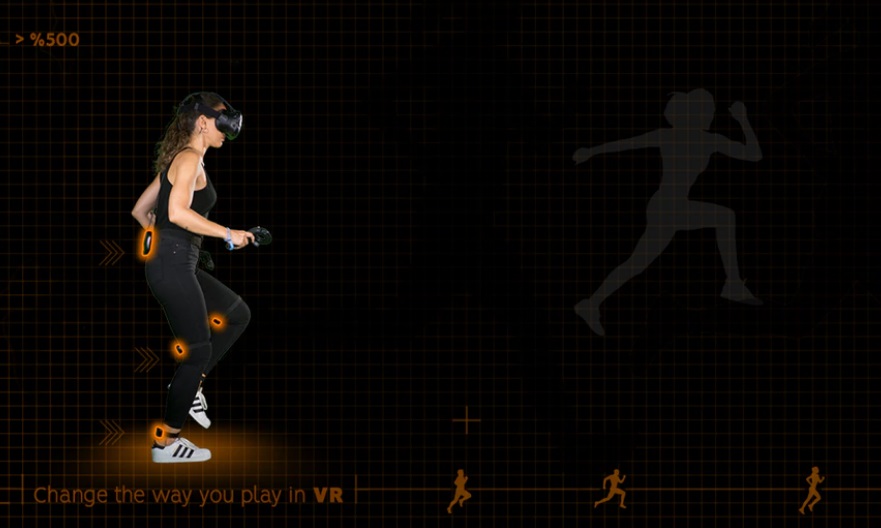 When I initially learned about WalkOVR, a wearable motion capture system that lets VR users physically move in virtual environments, I was thrilled with the prospect of a product that would incorporate lower body movement, but I was skeptical that it would work effectively. Also, as a seated player, I wasn’t sure that WalkOVR would have any application for me at all.

Recently I had the opportunity to try it and I’ll share my impressions in a minute, but first let me tell you about WalkOVR.

WalkOVR, a tech startup based in San Francisco, went live on Kickstarter earlier this year and they had reached their $25,000 goal within four hours. They recently surpassing $131,000 and initial backer products will be shipped in September. Others can still become involved with the project via the Kickstarter site.

Basically WalkOVR can be best described as a type of motion suit since you wear it on your body. There are built-in sensors and sophisticated motion capture algorithms that track the user’s movements in real time.

Rather than creating an entire suit or bulky tights, WalkOVR made a lightweight system that relies on nodes strapped to the player’s calves, thighs, and torso. The tiny nodes capture lower body movement and then transmit that to the gaming device via Bluetooth. It’s a simple system and it’s easy to use.

The most obvious advantage to WalkOVR’s motion capture system is the fact that you can actually walk in games with your legs rather than using your hands to control movement. Users can walk forward, walk backwards, run, bend, etc.

When gamers use WalkOVR, they’re encouraged to walk in place and use their legs rather than simulate movement with the hand controllers. According to WalkOVR, 100 minutes of VR gameplay with their motion capture system is results in the burning of an additional 500 calories.

WalkOVR is compatible with some of the most popular games in VR, including Arizona Sunshine, Onward, Pavlov, Raw Data, The Forest, Gorn, Fallout 4 VR, and many others. You can check out a list of verified games on the WalkOVR website.

Although I normally play seated, I wanted to try the locomotion system standing just to see how it would work for the average user. Tugra Sahiner, founder and CEO of WalkOVR, put the straps on me and in a matter of minutes I was ready to walk around the virtual environment. It was actually quite amazing. I’m so used to moving the joystick to navigate virtual worlds that it was definitely a new sensation to actually walk in place. My main thought was that most people are going to love this.

With that said, I had already been standing for many hours that day and all I wanted to do was sit down. My feet were swollen and my legs hurt. Besides, I wanted to try the product in a chair to see if it would have any benefit for seated players.

I asked Tugra and his assistant for a chair and they were quickly accommodating. Since the position of my legs had changed, they had to make a couple of adjustments to the nodes, but it literally took maybe three minutes for them to adjust the straps and then I was ready to go once again.

Once they said I could play, I simply started lifting my legs from a seated position and it worked perfectly. I was once again able to walk around by using my own lower body movement, but I did this while seated.

The applications here are tremendous. While there are many reasons people play seated, for those who do it for health reasons, we really do want to use our legs, but standing in a VR game for an hour or more can be painful and sometimes impossible. When someone plays games like Echo VR seated, there is still movement that can be achieved through a swivel chair and those games can even stimulate similar lower body movements encouraged in physical therapy.

But what about games like Onward or VR Chat, where the user spends time walking in the virtual environment? This is different from active VR sport games like Echo Arena. For those games, typically a user would navigate with the joystick, but with WalkOVR, they’re able to move in place. Seated players can do this as well by lifting the legs and it will allow them to exercise those lower body muscles (and core muscles since you have to use your stomach muscles in order to raise your legs while seated).

Honestly I was worn out after I used this product, but I’d definitely use it again. I always feel like I have a great workout when I play VR games, but WalkOVR definitely encouraged me to use my legs more. Considering the fact that I’ve been in a wheelchair several times over the past 16 years, I can always use extra exercise for my leg muscles.

Regardless of whether someone uses the motion suit as a standing or seated player, WalkOVR is a great way to enhance your VR experience by controlling your avatar when you move in place and meanwhile, reap the benefits of increasing your lower body movements.

Note:  I’ve tried this product and I’ve received no compensation for my honest opinion.