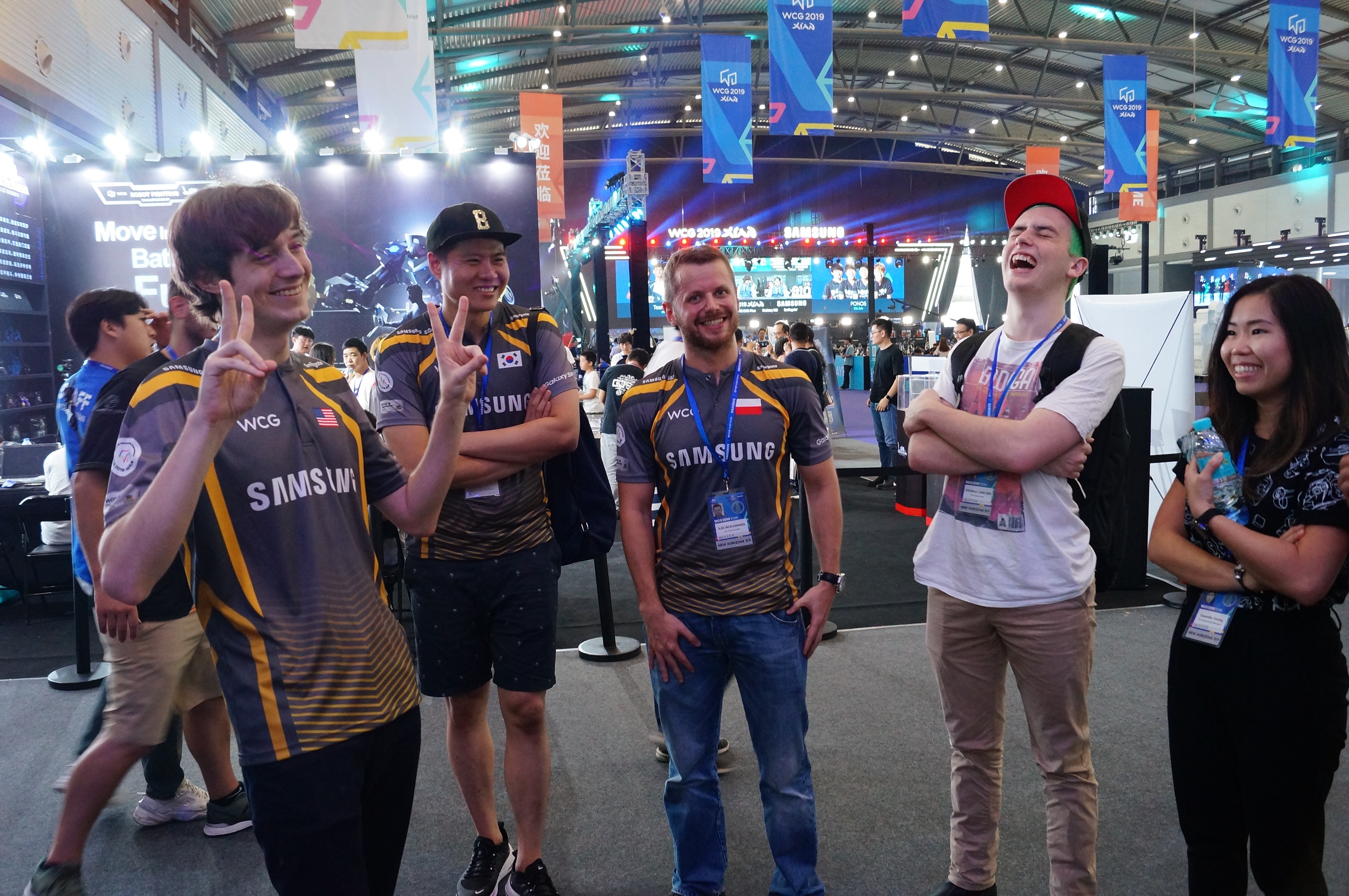 The World Cyber Games VR Tournament took place July 18-21 in Xi’an, China. Also known as the Esports Olympics, WCG is an international gaming competition that formed in 2000. Hundreds of athletes from around the world are invited to participate in the event that features a variety of game titles. Phaser Lock Interactive’s Final Assault is a World War II themed action strategy game built from the ground up for virtual reality. It was featured at WCG 2019 as part of the New Horizons category.

The VR Tournament at Xi’an began with Final Assault players competing on the Kopal Mine map. Maps for this event were chosen by WCG officials.

Players could choose which division they believed would give them the best advantage. Although there was some variety in the divisions players chose, most preferred Colonel Beaumont from the US Armored Division. With Colonel Beaumont, players can roll out heavy tanks and explosives. In addition, they have access to the Sherman Crocodile, an powerful tank with a front-mounted flamethrower. The Crocodile can obliterate enemy infantry and enter the enemy base relatively unhindered.

Korea’s Ddolddolddol-e and TinkyWinky were first on stage at WCG. TinkyWinky represented his home country of China well, but Ddolddolddol-e was determined to win the first match of the day and accomplished his goal.

In the next match-up, Dirvel and Chary faced each other. Dirvel represented his home country of Poland at the event while Chary represented the Netherlands. Both players used Colonel Beaumont, trying to unlock the Calliope, a type of tank that launches multiple rockets. Ultimately Dirvel’s Calliope was able to destroy four of Chary’s six towers and then take over her base.

Rimmy used the Sherman Crocodile of the US Armored Division to destroy RealityCheckVR’s new anti-tank gun in the fourth and final game of the day. This gave the Australian an advantage over the game’s other US player and it helped Rimmy take the win in round one.

Players competed on the Maginot map on day 2 of the Final Assault VR Tournament at the World Cyber Games. The tournament was double elimination and on day two players began playing the best 2 of 3 rounds. (Day one was best of one round.)

In the first match of the day, Ddolddolddol-e and Dirvel were tied one game each when Dirvel destroyed all of Ddolddolddol-e’s towers and began obliterating Ddol’s base with rockets from the Calliope.

After SadlyItsBradley had won the first match in the best of 3, Rimmy appeared to be holding his own, but his tanks were no match for attacks from Bradley’s U.S. Airborn planes that rained down terror and destroyed Rimmy’s base.

After being bumped into the losers bracket by Rimmy on the first day, RealityCheckVR returns to the competition on day 2 to beat JINMU in a 19:45 minute game. As the tournament progressed, longer matches became increasingly common as players began to recognize weaknesses in the enemies and develop new offensive and defensive strategies.

Rimmy was pushed into the losers bracket by SadlyItsBradley so RealityCheckVR had to face Rimmy once again. Unfortunately for RealityCheck, Rimmy defeated him 2-0. That win knocked RealityCheck out of the tournament and allowed Rimmy to advance to the losers final, where he ultimately lost 2-1 to Ddolddolddol-e.

One of the shorter matches of the tournament was the first game between Chary and TinkyWinky, which ended in under seven minutes. Both players had a Calliope under the command of Colonel Beaumont, but Chary seemed to secure the advantage with her position on a plateau above TinkyWinky’s base so she was able to effectively destroy his defenses.

Chary also won the second match in the best of three, advancing her to the next round, where she lost to Ddolddolddol-e, knocking her out of the tournament. Ddolddolddol-e’s win enabled him to advance to the losers bracket finals.

Dirvel and SadlyItsBradley faced each other for the first time in the WCG VR Tournament at Xi’an during the semi-finals round. Dirvel chose Colonel Beaumont while SadlyItsBradley went into battle with Colonel Nathan Simmons. Both players made use of the P47 Thunderbolt fighter jet as well as tanks, infantry, etc.

Ultimately Dirvel won the best 2 of 3, which allowed him to advance to the final round, but SadlyItsBradley had to face the winner of the losers bracket (Dddoldoldol-e) in order to earn another chance to redeem himself against Dirvel.

On day 4 of the World Cyber Games VR Tournament, SadlyItsBradley guaranteed himself at least second place when he defeated Ddolddolddol-e. This didn’t leave Dol empty handed, however. The popular Twitch streamer earned himself a bronze medal – with accompanying bragging rights and prize money – in the first WCG VR Tournament.

In the final match of the tournament series, Dirvel came out strong, winning the first match in the best of 3 games. SadlyItsBradley seemed to get into the groove during the second round. He was using Captain Nickles against Dirvel’s Colonel Beaumont and just when it appeared that Bradley would be defeated, he was able to turn the game around.

Ultimately SadlyItsBradley was make a comeback, winning the next two rounds. He claimed the gold medal and the first ever WCG VR Tournament championship title in Phaser Lock’s Final Assault.