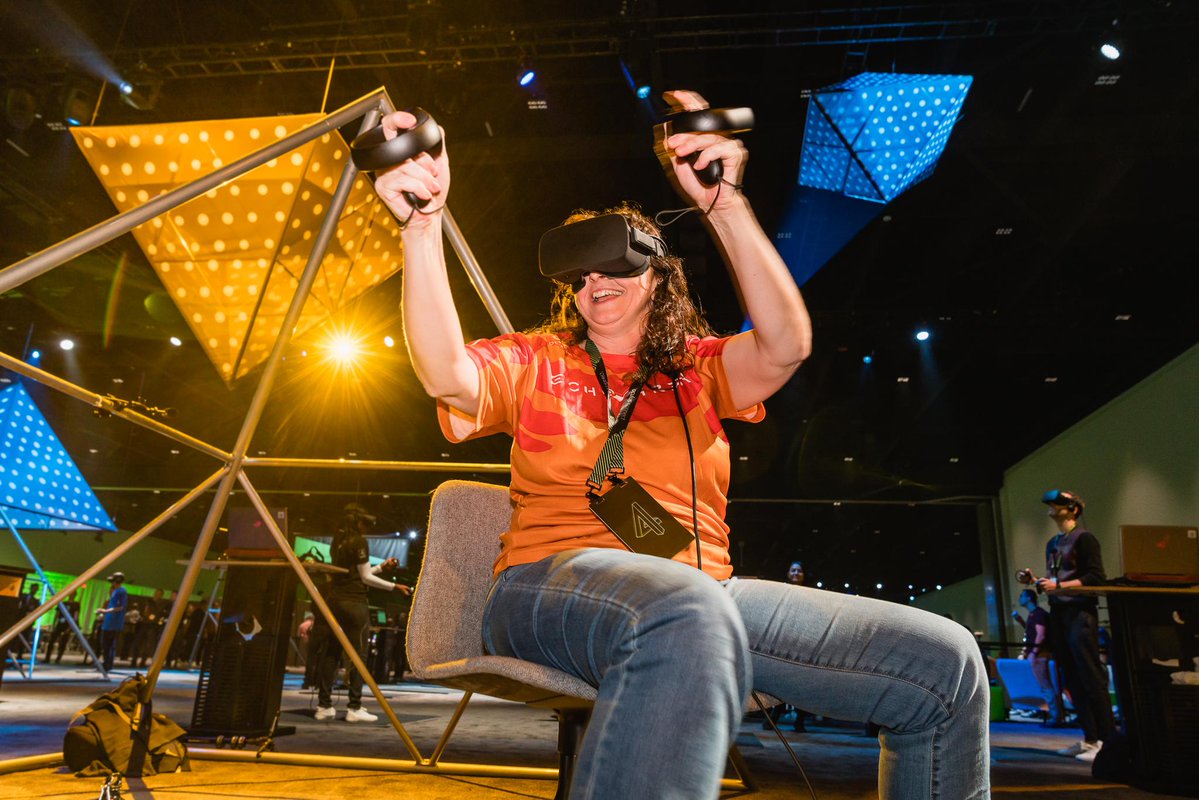 Every time I log into Echo VR, I feel a sense of freedom. The zero-gravity virtual environment allows me to leave my body’s physical limitations in the real world and fly around with ease. Due to health complications that cause blood to pool in my legs, it’s difficult for me to stand stationary for long periods so I’ve always played in a chair. Honestly when I started, I had no idea most other people played standing – and in the beginning they didn’t realize it was possible to play well seated.

Since I was totally new to online multiplayer gaming in the summer of 2017, I was a little hesitant to tell others much about myself. Eventually, however, I made friends, found teammates (for the newly formed, then-called VR Challenger League), and began to share more about my challenges. Ultimately my team made it to Nationals during Season 1 and I consider it a compliment that even to this day, most people can’t tell I’m seated based on how I play.

It has been nearly two years since Ready At Dawn’s Echo Arena was released and in November 2018 they brought us Echo Combat as well. Like all VR games to some degree, each has unique challenges for seated players, but these can be overcome with a little creativity.

Echo Arena is a 3-v-3 sport-like game where the objective is to work with your teammates to put a disc through the enemy team’s goal. Players use skills such as launching, boosting, passing, regrabbing, punching, etc. in a zero-gravity arena.

Many suggestions for seated players will apply to both games so we’ll start with general tips and then offer some specific ideas for Echo Arena. While these recommendations have been written specifically with the seated player in mind, they’ll also benefit standing players who have difficulty with a full range of motion.

Virtual reality games – especially ones like Echo Arena – are much more like real sports than traditional computer games so it’s a good idea to learn the controls for each virtual game, acclimate yourself to the environments, and practice movement before you go into competitive matches. In Echo VR, this means learn how to fly before you queue for a match!

A common question veteran players hear in Echo Arena is “How do people go so fast?!?”

However, there are other ways to move.

[Edit to this article: Update on March 4, 2021 to include this tutorial from VENOM about speed and mobility.]

One of the most important things to learn in the game is that you can boost off other players. When you see people moving quickly around the arena or a Combat map, they are boosting and regrabbing. This involves the process of lining up in a row (think Leap Frog) and then as you pull through one another, you each grab the next one and keep doing that in a “chain.” When this is done properly, you’ll exponentially increase your speed. Even a boost off one player will give you a speed advantage over anyone not boosting, but if you can work with your teammates to boost together, you’ll have a tremendous advantage.

Another way to move is by bouncing off objects or other players, which will allow you to reverse direction quickly. In order to do this, you’ll need to press your grip button and then very quickly release the grip as you come in contact with the thing you’re bouncing off of. (This is also the way you “slap” something, which you can do to the disc if you’re in a hurry to move it from one place to another.)

Since you might not be able to turn quickly or take a peek behind you as a standing player would, it’s important that you pay attention to where other players are at all times. This will help you avoid being stunned or killed as well as have options to pass or boost.

Teams that work together perform significantly better. Don’t be afraid to lead your team. Introduce yourselves in the team areas. They’re there for pre-game planning so make some new friends, discuss strategies, make suggestions.

With that said, public matches can sometimes be challenging so if you’re feeling frustrated, find some friends and form a party. Whether you win or lose, you’ll find the game more enjoyable if you’re playing with cooperative teammates.

Echo Arena requires a lot of physicality, but it is possible to be a top competitor and still play seated. In general, however, standing players have an advantage because they have a much greater reach and they can make up / down or side-to-side movements in real life that are difficult or impossible for the seated player.

Learn to handle the disc and pass well. There are very few players who can pass perfectly to seated teammates. People with limited mobility can’t turn on a dime, reach backwards, or reach a couple of feet outside the play area to grab a stray pass.

When I was competing in the VR League, my teammate Billyisms knew that it was easier for me to be quarterback, but if he did pass it to me, it had to be a good pass in the direction I was going. If a pass is outside the immediate area of a seated player, it’s likely they’re not going to be able to catch it because they just can’t reach as far.

Practice passing well and when you feel comfortable with your throwing abilities, see if you’re comfortable with the QB position. If you don’t want to QB, then encourage teammates to practice passing it in such a way that it goes slightly in front of you (which is really where they should be aiming it anyway since everyone is presumably flying forward).

Probably the biggest challenge in Echo Arena for seated players is dealing with the people who insist on squatting all the way to the ground as you approach them because they know this puts them below your reach. Literally they fall about four feet below floor level in real life for the seated player. It’s my biggest pet peeve of the game. Alternatively, they’ll try juking out of the way, knowing that your reach is limited.

The best way to deal with these players is simply to plan ahead. It’s the same people who do that stuff all the time so you can pretty well anticipate it. Once you identify the ones who do it repeatedly, there are two main ways to counter the behavior.

First, just stop before you get to them, grab a geometrical object, and then when they approach, fling yourself out, punch them, and steal the disc. Always try to punch them because sometimes you’ll manage to stun them and then you can at least stop them. This gives you or your teammates time to steal the disc.

Second, stay paired with a teammate. If an opponent is consistently jumping up or squatting down out of your way, then plan beforehand for one of you to fly up and the other to fly down when you get close to that opponent. Usually one of you will be able to punch them and/or grab the disc. The added benefit of this tactic is that you’ll be close to your teammate so you can grab one another and boost back to the action if you happen to miss the person with the disc.

One last note about dealing with players who juke a lot:  Don’t hurt yourself trying to get to these players. If you play seated because you have health problems, you don’t need pulled muscles or broken bones because you’ve over-extended your reach, fallen out of your chair, etc. I’ve done this and honestly it’s just not worth it. It’s a game. Also, many of them get a kick out of knowing you can’t reach them. They do it because they can, not because it’s a good game tactic. (Passing to a teammate would be much better than trying to juke everyone in the arena.) To be quite blunt, I try to avoid playing with the people who do this constantly. They don’t want to play the game with their team. They simply want to show off their juking skills.

I was doing an interview recently and we were talking about how physical VR esports are. This person commented that not only is athleticism required, but you must be a healthy young athlete. Of course we had a lengthy discussion about that because many of our best players are a little older than average gamers and some struggle with serious health issues. VR levels the playing field to a degree so that you have the opportunity to excel despite physical challenges. And yes, if you qualify for LAN events such as the VR League season finals, they will provide a chair.

We want virtual reality to be accessible to everyone. There are volunteers in many of the most popular games (and in all the VR League Season 3 games) who will help you learn to play better, who can show you around the maps, or who will offer suggestions on play strategies for your unique situation. I’ve actually had a couple of amputees ask me for advice about playing with one arm, a deaf person who wasn’t dealing well with not being able to hear sound effects, and numerous people with back or other injuries who must play seated. Virtual reality is for everyone and we are here to help you. I’m by no means qualified to teach every VR game, but I will put you in touch with others who can help you.

Most people want VR communities to grow and we want you to love it as much as we do. Hopefully the suggestions for Echo VR will help, but if you’re struggling in any of the games, reach out and we’ll do what we can to make the games more accessible for you!